The ‘Troubled Families’ programme is a national initiative set up by the Government in 2012, in response to the 2011 riots. Its aim is to support disadvantaged families to have a better life, and since its debut, the programme has expanded to target 400,000 families across England.

This week, BBC Newsnight investigated the ‘Troubled Families’ programme. It claimed that, despite publicly lauding the programme as a success, the Government are sitting on an unpublished official evaluation of the programme which shows it has had “no discernible” effect on unemployment, truancy or criminality.

As will be explained further below, School-Home Support (SHS) practitioners have been contracted to carry out ‘Troubled Families’ work since the national programme began. In response to claims of a suppressed report, a Government spokesperson said: “There were several strands to the evaluation work commissioned by the last government and there is not yet a final report.” In the meantime, we want to take this opportunity to be transparent about our outcomes and to highlight the impact of our work.

Before we do, we would also like to emphasise that there needs to be more understanding of the nature of ‘Troubled Families’ work. Moving families from total disengagement and chaos to a more positive place is something that takes a large amount of time and effort, and any improvements they make should be applauded. What criticism of the ‘Troubled Families’ programme does highlight is the danger of setting short term targets and evaluation for long term goals.

What does SHS do for families with complex needs?

Over the past thirty years, we have developed an effective model of delivery based on our expertise of engaging families. We know that in order to transform the lives of families, we need to understand the root causes of their problems.

Our model builds on the strengths of families whilst also providing support for them to address their individual needs. We provide joined-up support alongside community services and agencies, so that families get the specialised help they need, working hard not just to signpost families to other services but to actively support them to engage and progress. As we come from a charity and are not a statutory organisation (which many of the families are wary of), we have found that families are more willing to build trusting relationships with us, allowing us to help them make positive changes.

In September 2013, we were contracted by a number of local authorities to carry out ‘Troubled Families’ work. Since then, we have worked with over 1,307 individuals. We’ve achieved some incredible results and the feedback we have received from the commissioners, other professionals, the young people and their families has indicated that our provision has been outstanding, with very high levels of satisfaction.

A snapshot of our outcomes from our ‘Troubled Families’ work in one authority over the past three years include:

73% of young people with a history of offending reduced their offending
79% of parents progressed in their readiness for work (not necessarily meaning they found work, but were on their way e.g. engaged in training, volunteering or attending employment workshops)
83% of children previously excluded from school reduced the number of school exclusions

Outcomes in this authority since January 2015 include:

76% of cases worked with have resulted in the attendance outcome being achieved or being on track
83% of families have been ‘turned around’, defined as they no longer fit the programme criteria
96% of families and professionals worked with said they felt extremely satisfied with the service/support/input received from us and would recommend our service to others

Family position at start of work with SHS:

Position at the end of work period:

We have also asked families to assess their own issues using the Children’s Outcomes Framework. Over the last 9 months, we recorded the following average scores amongst families we worked with in Newham: 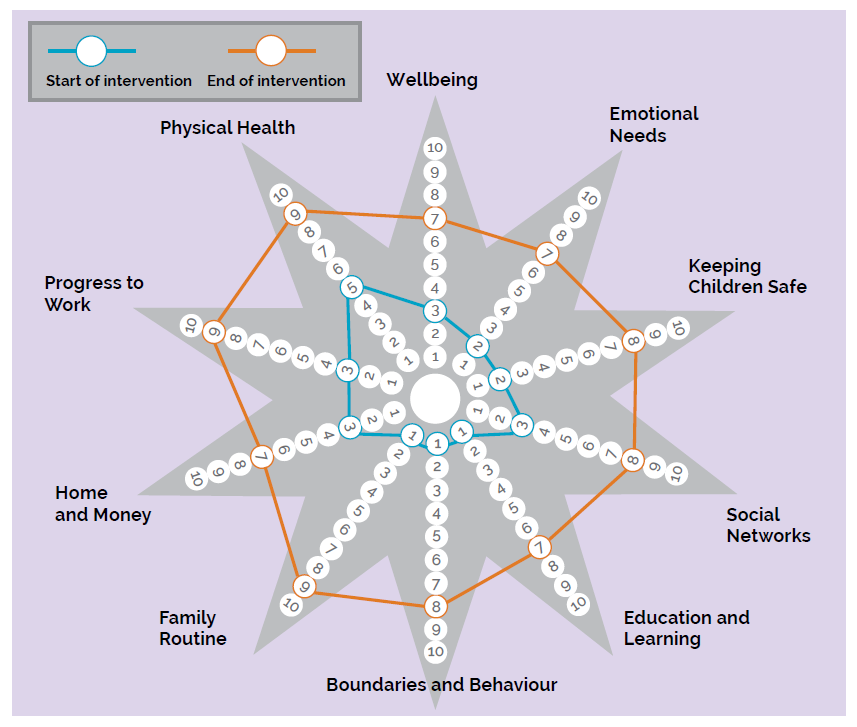 We also want to take the opportunity to highlight some of the individual families whose lives have been improved by our work.

In the above video, you can hear from Jackie. Jackie lives with her four adult children and three grandchildren, Cameron, 12, Curtis, 11, and Kodi, 9. Cameron, Curtis and Kodi were removed from their parents’ care after witnessing years of domestic violence, and the impact of this violence, as well as other issues including their grandmother’s alcoholism, meant that the boys had serious problems at school. Their attendance was low, their behaviour was poor and both police and social services were regularly involved with the family.

Our ‘Troubled Families’ senior practitioner Sam has helped to turn things around. Previously, the boys had tatty and incomplete school uniforms which singled them out for bullying. The SHS Welfare Fund was used to buy new uniforms which has boosted their self-esteem, and Sam visited their home each morning for a week to get them into a morning school routine. Within 12 weeks the boys’ attendance at school had dramatically improved. School attendance for all three boys is now 95%.

The boys’ behaviour at school was also a serious cause for concern with Cameron, the eldest, was being repeatedly excluded from his secondary school for violent behaviour. Sam spoke to the school and arranged for the boys to have mentors assigned, and also enrolled them on a course supporting children who have witnessed domestic violence. The programme has benefitted them enormously and their behaviour is now much improved.

Finally, Sam worked to build Jackie’s resilience so she could effectively parent the boys. She has given up drinking, has taken on some psychological support and now works as a midday assistant at a local primary school.

The police and social services haven’t been involved with the family since they met Sam.

You can read more of our ‘Troubled Families’ case studies here:

It is particularly worth reading Alexandru’s Story as it highlights one of the issues with the programme, as well as how it can be effective. Alexandru’s parents had substance addiction and, as a result, Alexandru and his siblings, Elena and Ana-Marie, were not attending school regularly. They were referred to the programme and their practitioner was able to make a huge improvement to the family’s lives. By the end of her work with them, attendance for Alexandru, Elena and Ana-Marie had improved from below 70% to over 90%. Both parents were having negative weekly drug screens and engaged brilliantly with the drug and alcohol programme offered, and they were able to make regular payments to reduce their debts. Despite the best efforts of their practitioner, the family were then evicted from their home. They were relocated to the other side of London, even though Elena was sitting her GCSEs, and she was only able to sit her exams when SHS provided the travel money for her to get across the city to her school.

This case study highlights the need for a consistent approach from all agencies working with these families. By evicting Alexandru’s family despite their progress, all of the time, effort and money invested were put under threat.

The important thing to remember is to use best practice; we’re an example of that. The ‘Troubled Families’ programme can be an incredibly effective way of turning around the lives of families who really need that extra support, but only when implemented correctly.

Examples of feedback for our work from referring social workers and other partners:

“There are very few professionals that have been as pro-active as SHS, excellent work”

“I find the work you do invaluable, you are able to spend time with families and young people that I can’t and that allows you to get information and build up trust. This links into the joint working, the flexibility is excellent and working together has benefited the families.”

“I would say that SHS have been vital in the support for the family. They have worked quickly and consistently in responding to a family with very complex needs. SHS’ contribution to professionals has been important when looking at what interventions should be in place, and they have advised the parent on how to safeguard her children in very difficult situations. SHS have been an integral part in feeding the correct information about what is happening in the family, especially in a crisis.”

Patrick*, a parent supported by SHS and ‘Troubled Families’

“I have to send a big thank you to SHS, without them, I don’t know where I would be now and I think this was the best help from the government that I have ever received and this should be given to all families as they are more helpful and resourceful than other professionals”

Ji-a*, a parent supported by SHS and ‘Troubled Families’

“She worked with me, she believed in me, no one has ever given the same kind of time or dedication”

Jason*, a child supported by SHS and ‘Troubled Families’

“I haven’t liked any of the people that have worked with me in the past, but my practitioner took a different approach and it worked.  Thank you.”

Pari*, a child supported by SHS and ‘Troubled Families’

“I knew I wasn’t doing my best, my practitioner approached it in a positive way and made me want to achieve. She saw the best in me and never gave up, even when teachers did”

If you would like to discuss our ‘Troubled Families’ work, please contact Jaine Stannard, Head of Services & Development, at jaine.stannard@shs.org.uk.