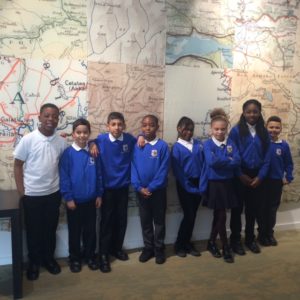 A trip to a big office may not be every 10 year-old’s idea of a great day out, but all preconceptions about what visiting a law firm would be like vanished the moment eight children and their parents from St George’s Primary School in Lewisham, accompanied by the school’s School-Home Support (SHS) practitioner Lee, walked through Clifford Chance’s spotless glass doors.

Clifford Chance’s Canary Wharf offices seemed a world away from their Lewisham primary school, despite the distance between the two being less than four miles. For all of the children and many of the parents, this visit was the first time they had been to Canary Wharf, let alone hosted by one of the “Magic Circle” of law firms.

To start the day off, the children and parents were treated to a tour of the Clifford Chance offices, led by Jo. Jo led us all through the numerous canteens and labyrinth of corridors towards the state-of-the-art gym and swimming pool. 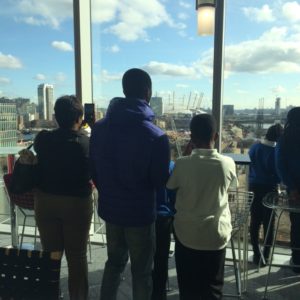 We were then launched to the 30th floor to have a look at the view over London. Although the height was a bit much for some and the rapid ascent in the lift made some of the children’s “tummies feel funny”, everyone was awestruck by the view. By this point, the children who had said earlier in the day that they want to be footballers or singers had changed their mind – they now wanted to work at Clifford Chance!

This was only reinforced when the children and parents got to meet four members of staff at Clifford Chance – Megan, Cavine, Andrew and Leonie – who had kindly given up part of their hectic morning to talk to them. The children loved hearing Andrew talk about his work, and how his passion for technology when he was younger led him to work for Clifford Chance as an Audio Visual Team Leader. Cavine, similarly, enthused both parents and children with her warmth and friendliness. She showed them that passion, enthusiasm and interpersonal skills were irreplaceable attributes in the world of work.

“The lady from Reception Cavine told my group to be confident in your work and do the best you can. She said never give up and stay in school. I want to be a nurse when I am older and Leonie told me her mum is a nurse”. 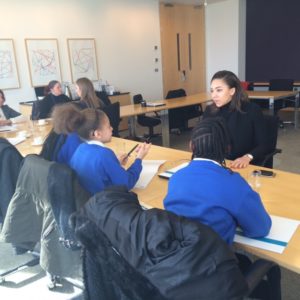 Leonie and Megan also had inspiring stories about how they risen so quickly in their careers. Leonie, who works as a Trainee Solicitor, explained that she hadn’t always wanted to work in Law when she was growing up, and her story made the children consider that there were more career options that being a footballer. Hearing her talk with such passion about working at Clifford Chance made some of the children want to enrol in Law School straight away. Megan had some great advice about always grasping the opportunities in front of you, as she had done on her way to become a Marketing Coordinator at Clifford Chance. All four members of staff really struck a chord with both children and parents. They showed that you don’t necessarily have to be a lawyer to work somewhere like Clifford Chance.

“My mum told me I have to work hard at school and then I can work at a place like this”.

Having the opportunity to visit Clifford Chance had a profound effect on the aspirations of the children. The parents too, many of whom were unemployed, left the offices with their confidence and aspirations raised.

“I get really anxious about these sorts of things and thought twice about this morning. I told myself I needed to support my son. I am happy I forced myself to go as it was a really interesting morning. This type of office makes you want to be ambitious for yourself and your children. Look at the lifestyle you can have working here”.

“I would never consider applying for a job in this sort of world. Listening to the different people and hearing what they do I now stand a chance. I am going to ask Lee to help me research the cleaning company who clean the building and see if there are any jobs there. I watched my daughter speaking to the different adults and could tell she was interested. I want her to have better chances than I did”.

“My son wants to be a professional footballer but I think today will show him there is more to life and work than football”.

All in all, everyone took a great deal from the visit. After saying goodbye and thanks to Jo and the rest of the Clifford Chance team the children headed back to school, ready to work hard and dreaming of working somewhere like Clifford Chance.