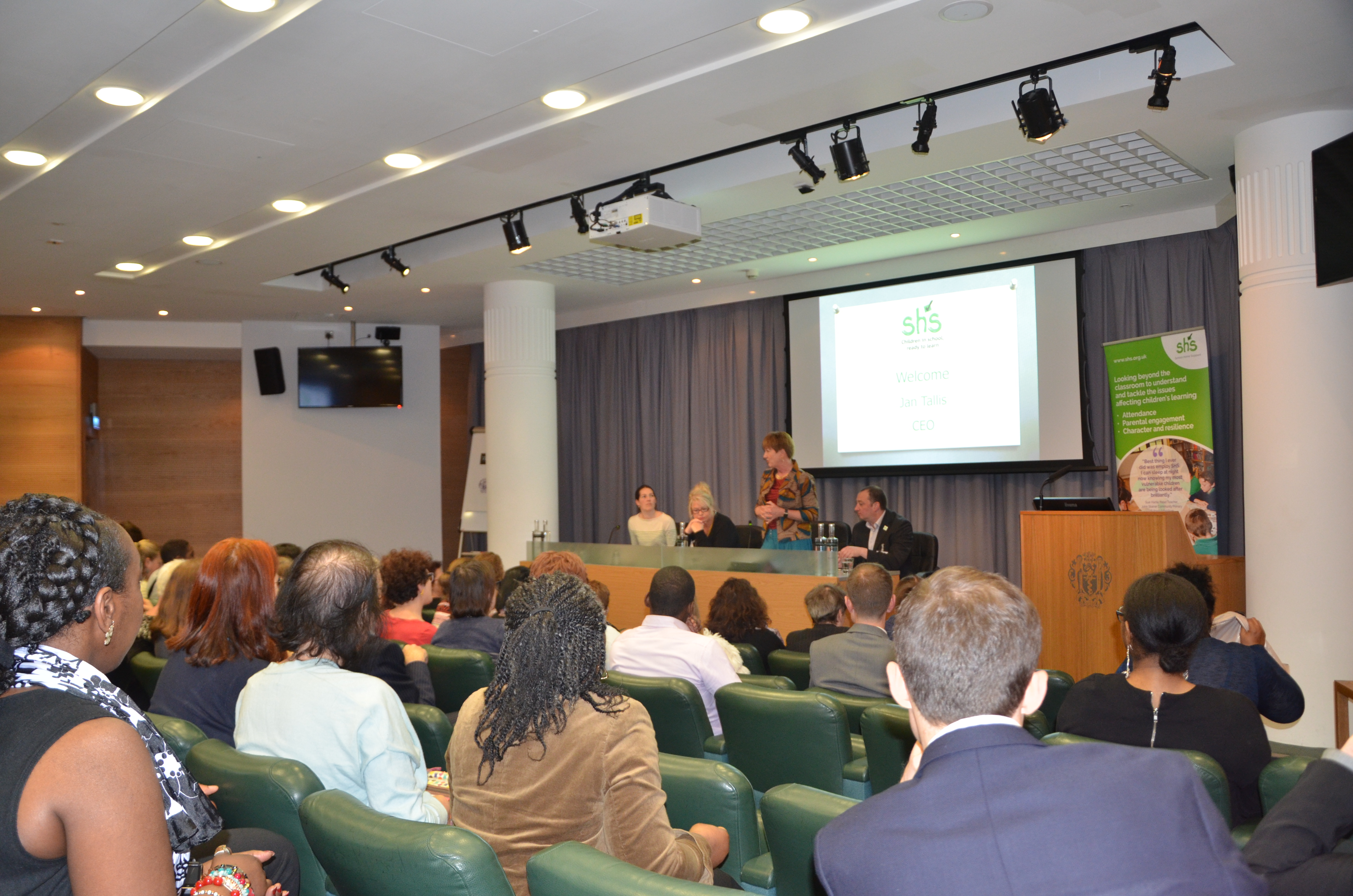 The School-Home Support (SHS) Annual Staff Conference took place this month, with the theme of ‘Well-Being’. A second theme at the event could have been ‘Sharing Expertise,’ as SHS staff benefited not only from listening to external experts but also to fellow practitioners who had plenty of great knowledge to share.

After a morning of speeches and awards, SHS staff split into groups to take part in a ‘Golden Nuggets’ networking session. Six practitioners moved between the groups, presenting innovative projects they had been working on in their schools and communities and/or areas of expertise they had developed.

Rushnara Khatun’s story opened with her starting at a school where parental engagement was low and hostility was high, and where she had the challenge of establishing trust and communication with hard-to-reach parents. Rushnara’s family counselling experience helped her, as did SHS supervision, a positive outlook and a willingness to listen. She was careful to find out and address the concerns of all of the parents (as they were worried that parents from certain backgrounds would be listened to more than others) and built up relationships right from the basic practice of always being present at the school gates in the morning for a ‘hello’ and a chat. Two years on, Rushnara’s work has left the school transformed. She was happy to share tips and people left the session loaded with ideas! 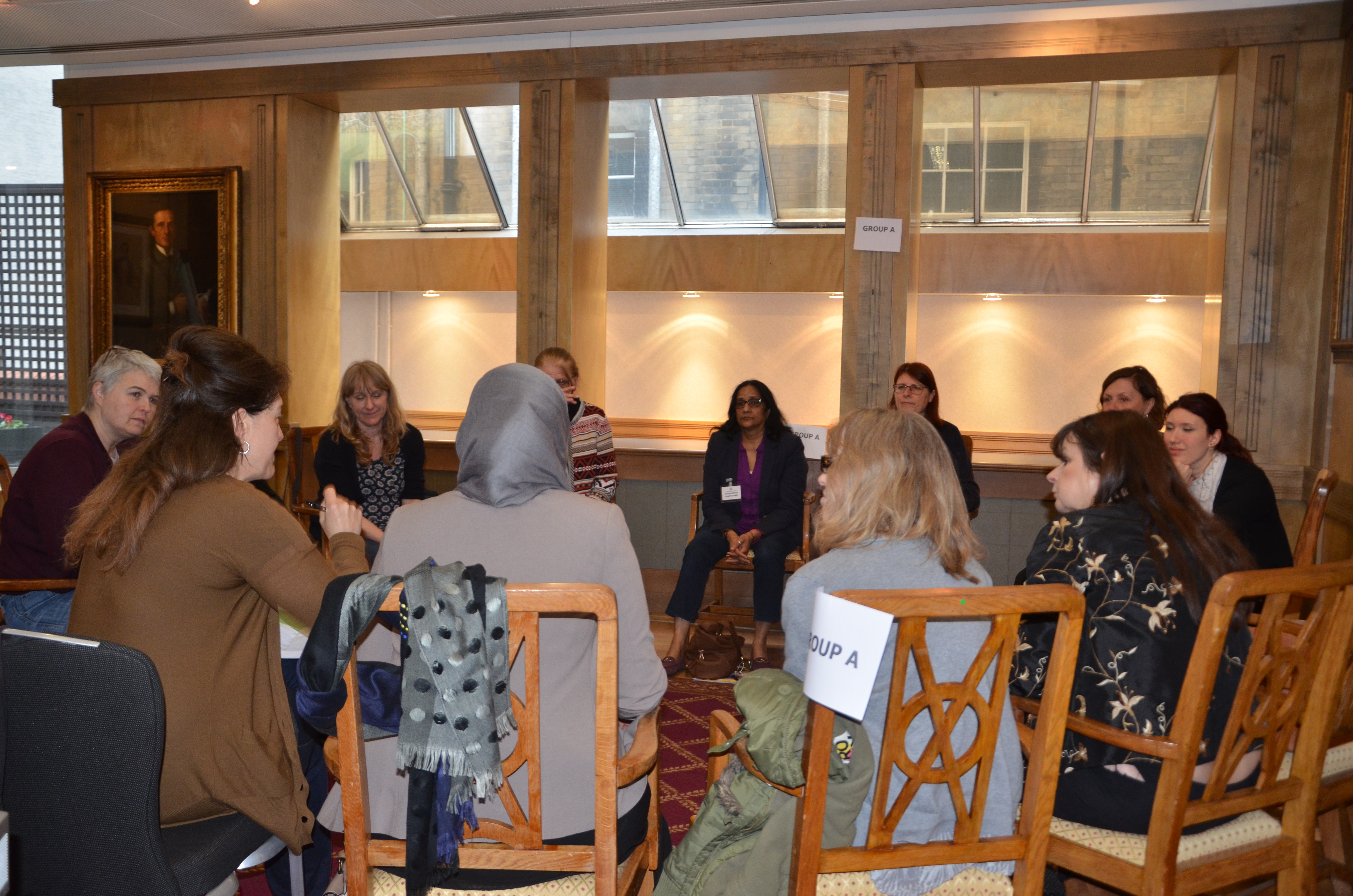 Rebecca Southern presented a workshop she had put together for children and parents, on taking the school’s behaviour policy and turning it into a set of rules for home. This not only encouraged parents to find out what the school’s policy was, it also encouraged an open discussion between family members on what their values were and how they thought it was best to behave. As well as emphasising the importance of things like routine, boundaries and respect, Rebecca was also able to use the workshops to provide resources for parents, such as laminated house rules to which each member of a family could refer.

Tackling the topic of Special Educational Needs and Disabilities (SEND), Daniel Jarrett and Owen Walters discussed what support children and young people with SEND should be receiving at different stages of their education. They explained what an Education, Health and Care Plan (EHC) is, how it is requested, what and who is involved during the assessment stages, and how it can be challenged if necessary. The pair also provided the names of several individuals and organisations that can be contacted to assist in applying for an EHC.

Motivated by the impact of unemployment amongst parents, Tracy Townrow has started running employment skills workshops at her school. She’s involved corporate volunteers, who have carried out one-to-one CV and cover letter workshops (as jobcentre advice is often out-of-date), talked through their experiences applying for jobs and run through interview roleplays with parents. Her workshops have boosted participants’ self-esteem and confidence, and helped one parent get a job only two weeks after taking part. A great outcome! 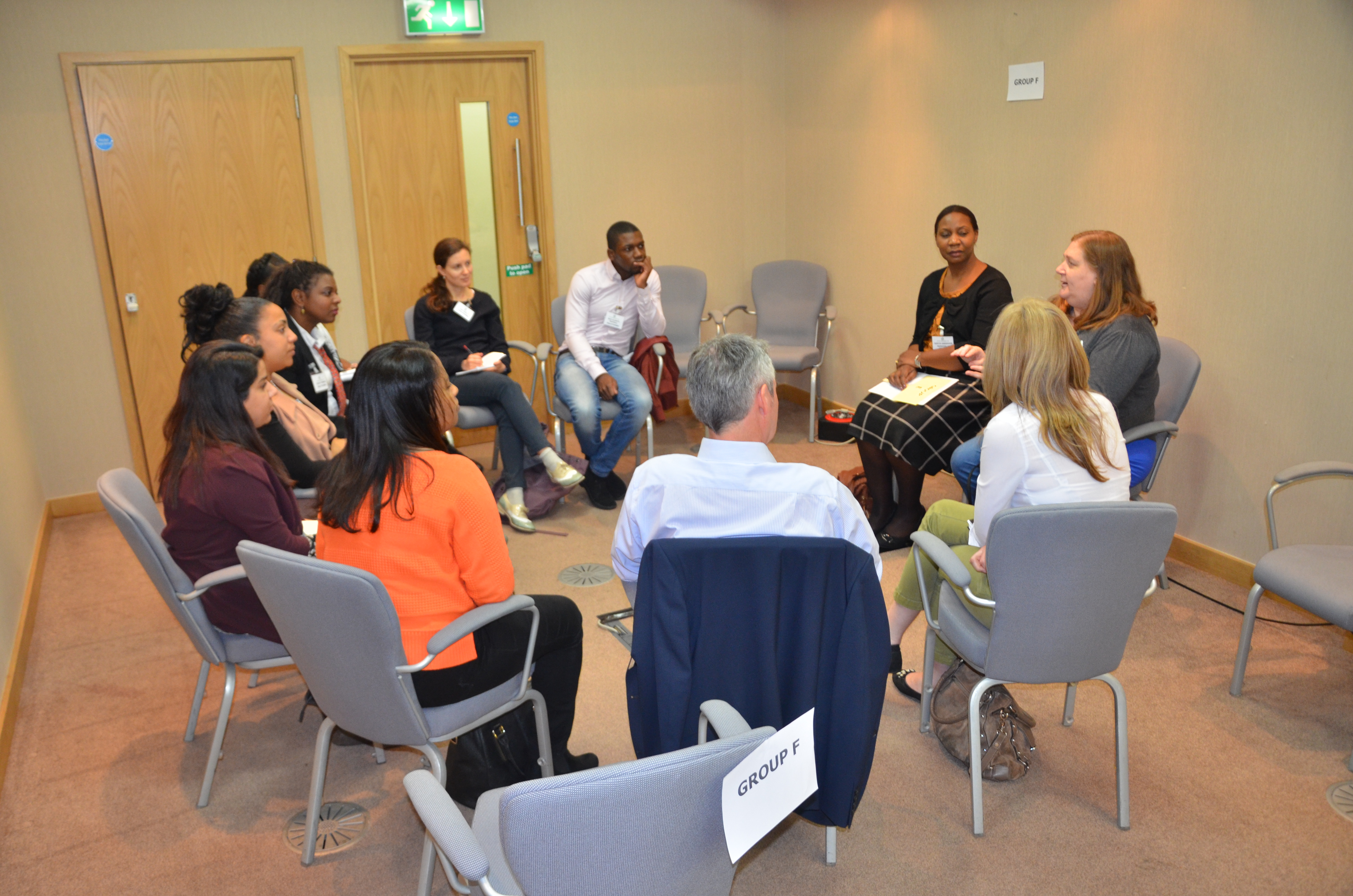 Last but not least, Sam Lowman introduced the Multi-Agency Safeguarding Hub (MASH). She explained what MASH is, its purpose, expected turnaround times for referrals and how referrals are prioritised depending on the perceived level of concern at the point of referral. Putting MASH into context, the group discussed the sad death of Daniel Pelka and the benefits of reporting all concerns, so that over a period of time, every small piece of information can lead to a complete picture being created of the needs of the child. Sam’s overall nugget was about the importance of building relationships; being introduced to a named contact at MASH and professionally building trust and respect.

These sessions encouraged other practitioners to speak up about their projects too. One practitioner had been running positive male role model workshops for the fathers, uncles and brothers of pupils at her school with tremendous success. Another practitioner discussed how she included parents in school gardening projects who have never had a garden in their life, and so did not relate to what they considered a ‘middle class’ pursuit. She encouraged them to grow small potted plants in the project, to take home and keep on their balconies or window sills, and found enthusiasm grew when everyone felt they could be involved.

Listening to the kind of innovations practitioners make in their work everyday was inspiring. More than one practitioner was surprised to realise that their own projects had made them a bona fide expert in a topic, and that they could easily give out advice to overcome obstacles. It is easy to underplay our individual methods and personal knowledge, but this is one of the areas where SHS practitioners truly shine. Full details of the ‘Golden Nuggets’, along with resources, contacts and other information, are all available on the SHS Membership platform. 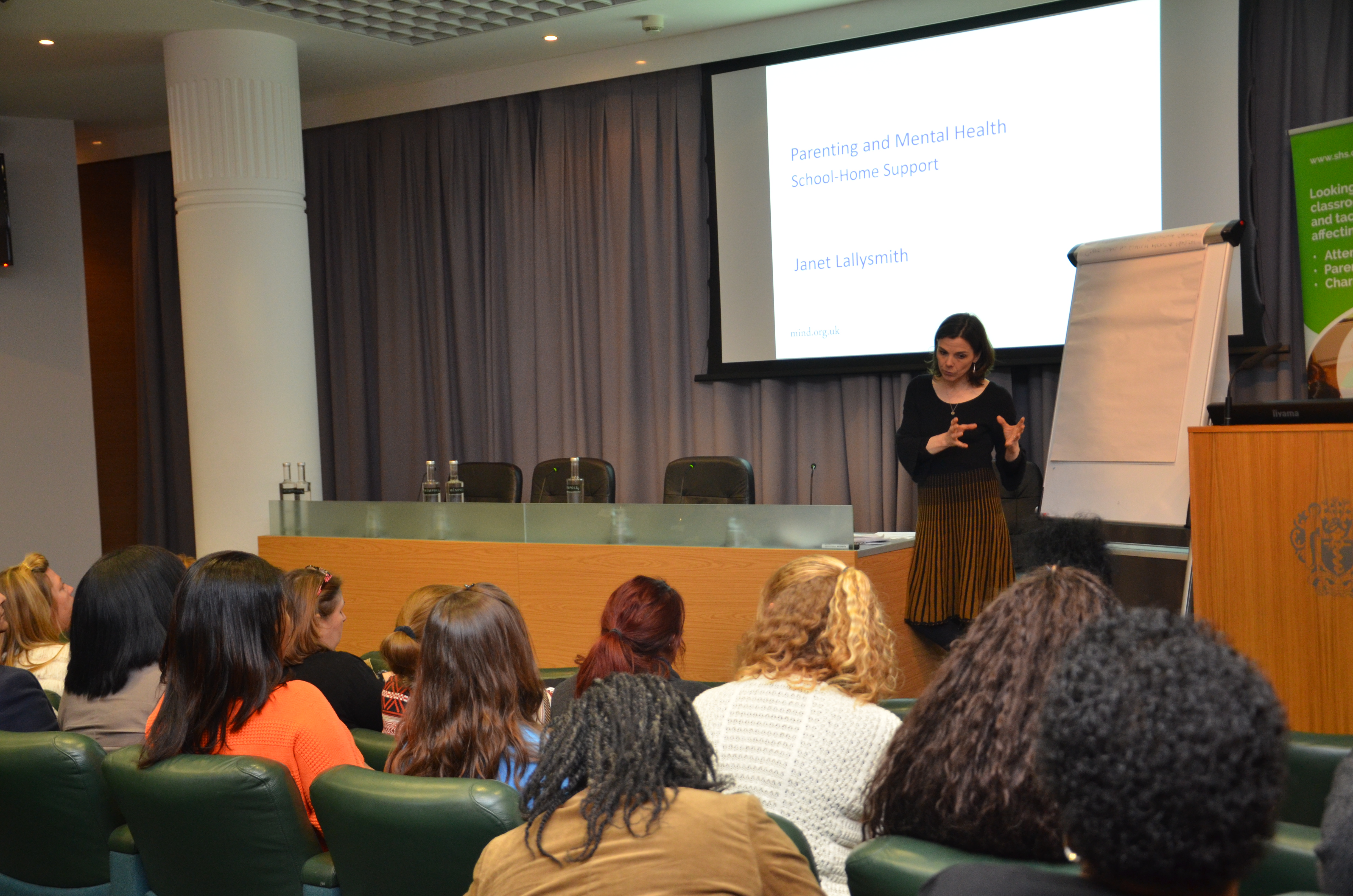 After the networking session, attendees split into groups for a workshop titled ‘Parental Mental Health’, by Janet Lallysmith from the charity Mind, and a presentation titled ‘Supporting Parents Post Domestic Abuse’ by Jo Sharpen from the charity Against Violence and Abuse (AVA). The sessions provided facts, statistics and guidance in these areas (did you know that 1 in 4 of us will experience a mental health problem in the next year? Or that 1 in 5 children have been affected by domestic abuse?), and gave staff opportunities to discuss how they dealt with situations involving mental health and domestic violence and to ask questions. It was also interesting to see the overlaps in topics with SHS policy – there were many heads nodding when Jo said, “When there’s domestic violence, there’s a doubled rate of absence from school.” The effectiveness of using school absence as an indicator of wider problems is something we have always been vocal about, and it was good to see this belief shared by AVA.

The SHS Annual Staff Conference is something that everyone at SHS looks forward to. It is a great opportunity to meet other members of the SHS team and to hear the impact that everyone is making. We hope that everyone enjoyed it, and send out a big thank you to everyone who organised the event!