The Department for Education has published its third State of the Nation report, which shows young people’s wellbeing is gradually improving, despite the challenges that remain. The report shows a link between regular attendance at school and positive wellbeing, highlighting the positive impact of being in face-to-face learning.

2022 has already seen some shocking reports in the news about high levels of pupil absence and children missing out on school. Our experience supporting children and families for many years gives us a special insight into the best way to support children and their families. If you want children in school and ready to learn, (and we do!) you need to know what’s going on at home. Tackling the factors that affect mental health is an integral part of our work to safeguard children and young people.

“Children and young people’s mental health is an area of need that School-Home Support practitioners encounter in their day to day roles. “Child mental health” was the safeguarding category that we received the highest number of alerts for in 2021.

“Child mental health encompasses various needs and the School-Home Support Family Intervention Team supports in a variety of ways. This can be via direct work with individual children and young people, group work, referrals to specialist services, support with accessing external support and oftentimes being that trusted adult that children and young people, along with families, can talk to about such sensitive topics.

We want to celebrate some of the creative ways our practitioners are tackling the factors affecting the mental health of the children and families we support.

Our practitioner Amanda shares her experience working with Jack, whose journey to school was causing him anxiety, and how she used creative visualisations on the walk to school to overcome his anxieties of the unknown.

Jack is a primary school pupil and has been diagnosed with Autism. He is also currently undergoing assessment for possible ADHD. He has a 13-year-old brother with Special Educational Needs and a two-year-old sister.

His mum Tanya explained that she was struggling to get Jack into school and that this was also impacting his siblings’ punctuality This disruption was caused by extensive roadworks appearing on their usual route to school and therefore rerouting the bus. Every time the bus turned off the usual route and did not follow the way he knew, Jack would become very anxious. This meant that the family would have to get off the bus, and take time to calm Jack, and would often end up walking the route he was comfortable with. This caused the children to be very late to school, and in some cases not attending at all.

To help tackle Jack’s anxieties around the journey into school, Amanda visited the family after a stressful morning and went to the local park with Jack and Tanya. Whilst there, they made a plan to meet the next morning for a treasure hunt to look for key items and take photos. This encouraged Jack out of the house without a school focus initially. The aim of this exercise was to take photos of items Jack would see on the new route to school, and then make a map with his photos that Jack could then share with his little sister as he led them along the route.

Amanda, Tanya and Jack took photos of familiar landmarks such as the local shop and the number 9 bus for school and finished with his school at a distance for the final photo. The next day, the whole family left early for school and Jack was very excited to lead them along a walking route to school. Jack’s mum has now been using this map on the bus as well and has regained some time in the morning. This means all three children are now in school on time most days. 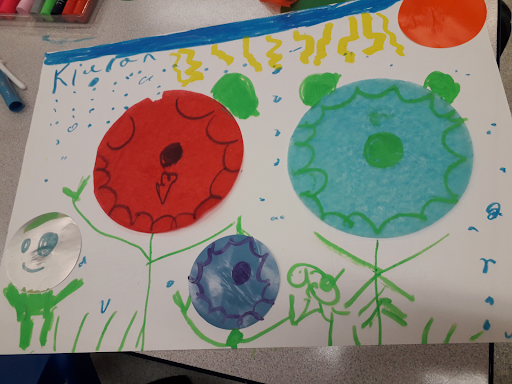 Our practitioner Tracey runs afternoon art therapy groups, which are open to children being directly supported by Tracey, as well as from the wider school. Tracey tailors the group size to the needs of the children attending so that she can spend enough time with each young person.

The aims of the sessions are for the children to explore their emotions, and have a creative outlet to express themselves, rather than through behaviour. The sessions are also an opportunity for the young people to make friendships, and for the older children to be positive role models for younger children who are part of the group.

During the sessions, the children talk about a wide variety of issues and topics and are able to speak freely without a set theme. They are encouraged to listen to each other without talking over each other. This instils a sense of belonging in the young people who attend the group and provides them with an understanding that talking about their feelings is a healthy outlet.

Tracey also has also run specialist one-to-one sessions over a two month period. Lydia is a primary school pupil, who was experiencing anxiety due to an ongoing problem at home with a neighbour. Lydia’s anxiety was affecting her daily, and she was struggling to sleep.

To help Lydia process her worries, Tracey provided her with a Worry Box, as a safe space in which she could share her feelings and concerns. Lydia decorated the box to make it special to her and used the box to write about her feelings and worries. The worries she put in the box would then be discussed with Tracey in their one-to-one sessions.

Using the Worry Box allowed Lydia to express how she was feeling in a less pressurised and more guided way. After the course of one-to-one sessions, Lydia continues to use the Worry Box as a way to express herself when she experiences anxiety.